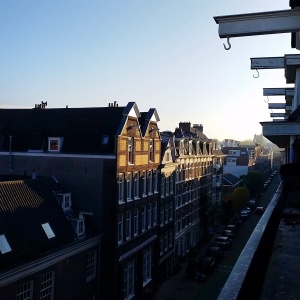 Our first Dutch sunrise from our 4th storey attic bedroom

A few weeks ago a friend and I went to Amsterdam as the last, but by no means least, girls holiday of the year. I heard so many people say good things about Amsterdam, and I was finally persuaded that my initial (and rather narrow-minded) idea of it being a city full of drugs, sex and gleeful university boys was wrong.  I was to find that Amsterdam was a place full of beauty, character, history, nice people and a tolerant, forward-thinking culture.

We spent 5 days wandering the tree-lined avenues and canals, taking in the museums, the architecture, the beautiful autumn weather, dining on some of the best food I have found anywhere, and generally absorbing the relaxed yet vibrant life-force of the city.  Once again, we rented an apartment listed on airbnb.com with a local Dutch woman as our host.  To have our own little home in the city for a week was wonderful, and if you haven’t tried looking on airbnb.com for accommodation on your travels, I highly recommend it.

There is so much to rave about in Amsterdam that I could go on and on.  However, I will share with you the highlights of our trip so that you can get some inspiration for your own travels!

Without a doubt, this is the best museum I have ever been in.  I was utterly absorbed by the story of Vincent Van Gogh as much as his art.  Leaving his job as a preacher to pursue his dream of being an artist at aged 27, and against many expectations, really resonated with me, as did his love of nature and his admiration of the ‘simple life’. His courage, conviction and tragic end really struck me.  Why is it that so many great visionaries and convention-busters can’t seem to exist long on this planet? It was amazing to walk around the museum, following the fascinating evolution of his life and art, from a man people doubted to a man whose name is known almost everywhere on the planet.

The Rijksmuseum is of course an impressive collection of art, and the building itself is utterly beautiful, but for me the Van Gogh Museum really told a story, and that is why it is one of my highlights.

De Poezenboot, or ‘The Cat Boat’ 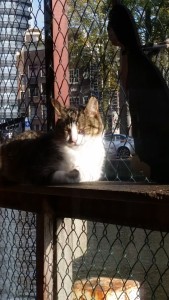 Cats! Need I say more? This house boat, run completely off charitable donations, houses some of Amsterdam’s abandoned and homeless cats. For a donation of your choosing, you can spend time with the little moggies and, if you’re lucky, catch feeding time and listen with much amusement to the chorus of twenty-plus cats miaowing.  It’s cats… on a boat.  You have to see it.  Visit their site here.

Amsterdam is full of charm and character, and the wonky houses play a massive part in that. Tilting this way, that way, forwards, and backwards, due to subsidence of the concealed stilts that they are built on, one wonders how long it will be until they all come tumbling down.  However, it is delightful to point out all the wonky, narrow houses as you are exploring the streets.  At least, for me it was anyway!

The ‘flea’ markets were amazing, and a vintage lover’s paradise.  We found a vintage clothes shop that was full to bursting with 90s gear; though we found it hilarious and slightly unsettling that our decade, the 90s, is now considered vintage, we had great fun finding the types of clothes we remembered from then. If I’d had more room in my luggage, I would have bought loads.  Instead, I settled for a flannel tartan shirt that is so comfy and warm this autumn. Plus, it is a zero waste purchase. Bonus!

We found so many of these! Amsterdam really is an easy place to eat healthily and organically, whether you a vegetarian/vegan or not.  Nothing is particularly cheap, but then I found Amsterdam to be quite pricey in general (though totally worth spending the extra dollar!).  Here are a few of the places we ate at that I definitely recommend (click on the names to go to their websites):

Golden Temple – amazing food, and amazing decor.  I had the most beautiful quinoa and veggie salad with a raw chocolate dessert.

Venkel – technically a cafe rather than a restaurant, but it serves until 9pm. This was the most inexpensive of the lot.  I had a beautiful salad with fresh, warm roasted veggies, sat in a cozy corner surrounded by locals.

Lavinia – another little cafe full of character, and very popular.  The food is a little pricier, but worth it.  Their soups, sarnies and cakes were delicious.  Nearly all of the places we visited had their own individual, quirky stamp on the interior decor. At Lavinia we had to sit outside it was so full, but it was nice to look at the buildings and see the bikes wizzing passed on this quieter street off the main road.

Biomarkt – this is a store, but it is full of organic fruit, veg, teas, snacks and much, much more. This was just around the corner from our apartment, and we greedily stocked up on goodies to eat in our apartment, which was self-catered. It wasn’t too expensive either, and the staff were really friendly. (Everyone speaks such amazing English, which saved me from embarrassingly trying to remember Dutch numbers).

Juice Brothers – I picked up a fresh juice and kale salad here for lunch one day.  Really friendly service and great quality food.

Normally, whilst on holiday, we all like to indulge a bit, and sometimes food choices are limited.  As a vegetarian, I find it easier now to eat out, but it is still a challenge in some places in Europe.  Amsterdam was an exception to this – there were organic cafes and juice bars nearly everywhere we looked. It certainly appears to be more of a norm than anywhere I have visited before, and it gives me hope! (Even the pancake shop we visited, The Happy Pig, was organic!)

FYI – the app ‘Happy Cow’ was an absolute godsend. I paid for the full version (roughly £3) and it was totally worth it. If you are vegetarian or vegan, I can’t recommend this app enough! It shows you so many places to eat or stores to buy from, and I believe they have listings for over 126 countries. We found so many of these restaurants through this app.

I’d also recommend the DK Eyewitness Top 10 Travel Guide: Amsterdam as a guide book. It is informative, easy to carry and comes with great maps.  Get it here.

Of course, there is so much to see and do in Amsterdam. The Red Light District was definitely an ‘experience’ that I wasn’t quite prepared for (brothels occupying the same square as Amsterdam’s main cathedral was an eye-opener!) but it is part and parcel of the city’s identity. Leaving my own rather confused feelings about the Red Light District to one side for a moment, it is good to acknowledge that the same liberal attitude that allows such open displays of prostitution and sexuality also leads to progressive and open-minded ideologies that are overwhelmingly positive.

The Homomonument, the memorial to persecuted gay men and lesbians was the world’s first memorial to honour those persecuted by the Nazis.  And there is a general ambiance of tolerance and individuality that is celebrated everywhere. It was a busy city but, in my experience of it, there was no sense of conflict, aggression or stress.  I am not generally a city person, but to visit one in which I felt totally relaxed was a breath of fresh air.

I hope you decide to pay Amsterdam a visit at some point: it is definitely worth it, and only a 50 minute plane journey away (from Birmingham, anyway!).  It was truly one of the most enjoyable holidays that I have been on and, despite doing a lot of sightseeing and walking, I came back feeling totally refreshed.

Here is a slideshow of some photographs from our little adventure:

This site uses Akismet to reduce spam. Learn how your comment data is processed.

Some artsy time out on the hills. Bundled up like the michelin man, sheltering in the lee of a giant rock, it felt so good to draw until my fingers went numb. I would get so absorbed in my sketching that I would almost forget where I was and have a beautiful surprise when I looked up to that view 😊 #art #hiking #wanderer
Watery sunlight over rolling hills, with patches of frozen earth and sparkling grasstips. The wind almost nipped my ears off but all in all, a beautiful January hike. #hiking #wanderer #shropshire
They may look cute and curious but these gooseys promptly ganged up and hissed at me, and told me off for getting too close 😆 I think they hang around on their lawn, berating passing hikers. #geese #hiking #wanderer
I have been reminiscing a lot lately about the places I went to in Australia and how lucky I was to live there and meet some of the beautiful wildlife. It breaks my heart to see what is going on, and part of me wishes I could jump on a plane back there to help with the wildlife and habitat rescue efforts. I decided to donate to @wireswildliferescue to aid their emergency rescue efforts in lieu of being able to do anything in person. Please consider donating some money from afar. Australia has a special connection to the UK but more importantly, we must step up to protect wildlife that is powerless against fire and other environmental forces, whether caused by human activity or not. (For the record, I am inclined to agree that human-induced climate change has exacerbated the bushfires. I vow to educate myself properly and adjust my lifestyle accordingly). #australia #australianbushfires #protecttheplanet
I miss this fluffmeister already 😥 #catlovers #catlife #catsofinstagram #catlady
In her little cats nest. Too cute. Happy New Year everyone! #catsofinstagram #catlovers #catlife